Today it was announced that 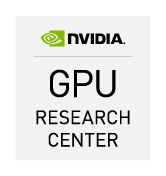 TU Wien hosts an NVIDIA GPU Research Center, for which Josef Weinbub, Florian Rudolf, and I are PIs. The agenda includes improvements to ViennaCL as well as PETSc, both open source libraries I'm actively involved in. In addition to continued, incremental improvements, we will also look into two interesting research questions related to the numerical solution of partial differential equations.

In joint research with my colleagues Matt Knepley and Andy Terrel efficient finite element residual evaluation routines were developed, for which we demonstrate over 300 GFLOP/sec in an upcoming paper. Within the next months we want to extend the approach such that we are also able to directly assemble the system matrix on the GPU, overcoming certain limitations of the PCI-Express bus. Most importantly, the availability of the full system matrix allows for various preconditioning techniques to speed up convergence.

Algebraic multigrid methods are popular for use as preconditioners after discretizing elliptic partial differential equations, because they allow for asymptotically optimal linear complexity (i.e. the time to solution scales linearly with the number of unknowns). Moreover, the algebraic nature of multigrid is very appealing for practical use, because the coarse grid hierarchy is constructed in a black-box manner from the system matrix only. This setup stage, i.e. building the grid hierarchy and the transfer operators between the different grids, is fairly challenging to parallelize, whereas the cycle stage involving mostly matrix-vector products and relaxation methods such as the Jacobi method expose enough fine-grained parallelism.