The massive parallelism of GPUs provides ample of performance for certain algorithms in scientific computing. At the same time, however, Amdahl's Law imposes limits on possible performance gains from parallelization. Thus, let us look in this blog post on how *few* threads one can launch on GPUs while still getting good performance (here: memory bandwidth).

An often important aspect is the cost of thread synchronization. Compute units in GPUs are arranged in so-called Streaming Multiprocessors (NVIDIA terminology) or Stream Units (AMD terminology), within which threads can be synchronized relatively easily and exchange data through fast, on-chip shared memory. Synchronization across {Streaming Multiprocessors|Stream Units} is usually achieved on the kernel level and is thus fairly expensive.

Performance optimization guides from both AMD and NVIDIA recommend to use 'many' logical threads when programming in OpenCL or the NVIDIA-only CUDA. Suggested values are beyond 10,000 threads overall. On the other hand, each thread block (CUDA terminology) or workgroup (OpenCL terminology) can consist of at most 1024 threads (newer NVIDIA GPUs) or 256 threads (AMD GPUs). 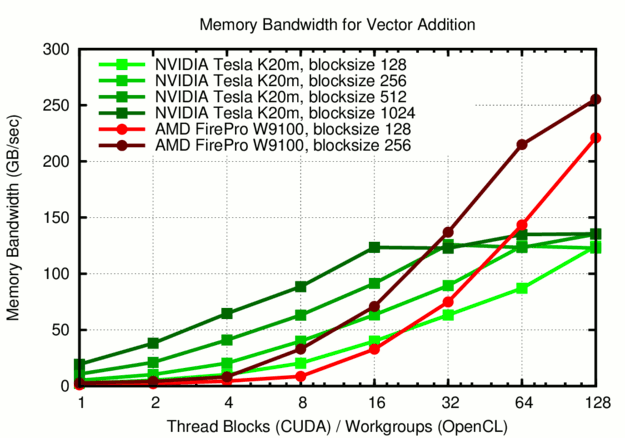 Comparison of the effective memory bandwidth obtained for different thread block sizes (CUDA) or workgroup sizes (OpenCL). The NVIDIA GPU is able to provide 90 GB/sec with only 8 thread blocks, while AMD GPUs require at least 20 workgroups to reach the same bandwidth.

Overall, this simple benchmark yet again confirms my observations of AMD GPUs often providing the better peak performance than NVIDIA GPUs, but that peak is harder to reach. In a follow-up post I will discuss an actual algorithm where good performance for small workgroup sizes becomes important. Stay tuned!

This blog post is for calendar week 3 of my weekly blogging series for 2016.