The PETSc User Meeting 2016 took place in Vienna, Austria, from June 28-30, 2016. Overall, the feedback received from the delegates was very positive; which I was glad to hear as main organizer of the event. In the following I want to share what I consider to be key factors for success and lessons learnt.

What certainly stimulated exchange among delegates was the common denominator: the PETSc library. However, other conferences usually (or shall I say 'hopefully'?) have a common theme (may not be software) as well. Thus, I claim that what I discuss in the following is not specific to the PETSc User Meeting, but broadly applicable to workshops and conferences with about 50-150 participants.

The first slide of my welcome address became the anchor for the rest of the meeting: 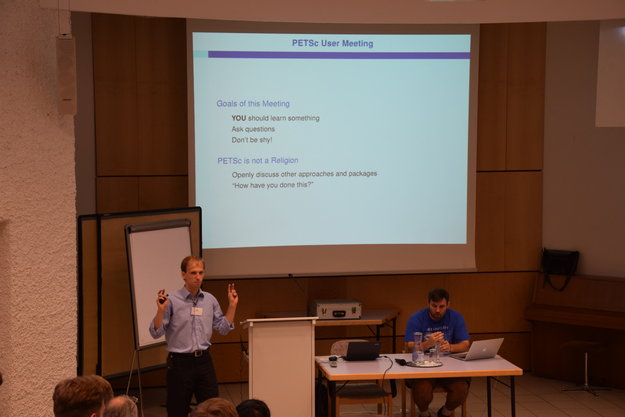 It clearly stated that the goal of the meeting was for the audience to learn something. To do so, we encouraged everyone to ask questions and not to be shy. And so they did: We managed to go through only two thirds of the slides we had prepared for the tutorial. This was because the audience followed us through the whole set and asked really good and detailed questions. At the end of the tutorial, we had no bad feelings about the material that we couldn't cover: It is better to have an active and alert audience for two-thirds of the material rather than losing them half-way through. 🙂

The second important bullet point from the first slide was the statement "PETSc is not a Religion". Our intention was to free any subsequent discussion from being tied to PETSc as a product. After all, PETSc just happens to be our common ground for our research, but in the end we care about the research. In particular, we explicitly mentioned other packages such as Trilinos and that the audience should not be shy to mention things other packages do better. This completely avoided the awkward atmosphere of nobody daring to mention competing packages. By focusing on the common goals rather than our current set of tools, we had a truly open discussion throughout the three days of the meeting.

My personal impression is that many conferences in the computational science and engineering field tend to pack too many talks into too little time. However, there is only so much information my brain can process on a given day; all too often I find myself with too much of the conference day left when my brain calls for a break. Fortunately, my co-organizer Matt Knepley has a similar view on this, so the decision to keep the schedule lean was easy.

We had a total of 13 talks, each 30 minutes including discussion, spread over two days. Thus, we were done with the talks by 14:30 on June 29 and by lunch time on June 30. This left plenty of time for more interactive activities in the afternoon:

At first I was unsure about the allocated time for the plenary discussions. What if we have nothing more to say after 30 minutes of a 90 minute session? Fortunately, the opposite was true: In all three interactive sessions the lively discussions continued well beyond the 90 minutes allocated. (No worries, we stayed on schedule!)

The Hotel Am Spiegeln turned out to be an excellent choice for the PETSc User Meeting. It was not a single reason that made it great, but a combination of small things that happed to fit perfectly: 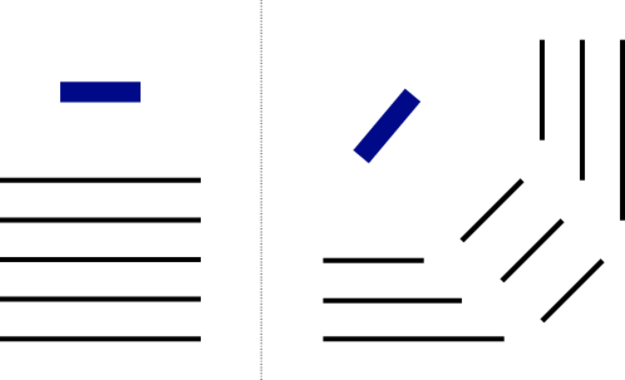 In a cinema seating arrangement (left) it is harder to see each other's faces. An amphitheater setting (right) is much better suited.

The Unconference Concept Scales Poorly to a Small Audience

The last session on the afternoon of the second day was an unconference session. My experience with an unconference setting is based on the Google Summer of Code Mentor Summits, where it works great. In short, delegates are expected to suggest their own topic for discussion, and then groups will form and discuss their topics in parallel. With less than 100 delegates, topic groups in an unconference setting tended to become very small. Also, with only one afternoon session one had to make compromises, as topics overlapped. Thus, we ended up with only two topic groups: One on parallelization (software, hardware, algorithms) and one on multi-physics coupling (field-split preconditioners, discretizations, etc.). Overall, the content discussed was definitely interesting, but the unconference concept didn't really work any better than just setting up two topic sessions upfront.

Registration Fees Are Not Evil

Last, but not least, let's talk about the money.
Have you ever been to a conference with a registration fee of 500 Euros or more? I have, and I never had the impression that the experience was worth the money. So, here are the good news: The PETSc User Meeting 2016 did not charge any registration fees. Hence, everything including the room rent, student travel grants, lunch, and coffee breaks was paid from sponsor money. At this point I'd like to thank Intel, Tech-X, Google, and the Vienna Scientific Cluster for their support.

The overall budget was just slightly above 10k Euros. We went for a fixed room rent of about 3k Euros for the conference venue in order to be prepared for up to 130 delegates. About 4k Euros were spent on lunch and coffee breaks, and about the same amount on student travel grants. Thus, we spent about 30 Euros per delegate per day (excluding student travel grants). For comparison: A typical deal for conferences in Vienna is about 50-60 Euros per delegate per day for an all-inclusive offer.

From a risk management perspective, however, charging no registration fee put quite a lot of pressure on my nerves. We had 93 registered delegates, of which 15 did not show up. If 130 delegates had registered, lunch would have been on a self-pay basis. Not charging any registration fee saved us some time with handling all the payments, but it exposed us to a higher share of no-shows and made negotiations with the venue harder. The feedback at the end of the meeting confirmed: A moderate registration fee (approx. 100 Euros) would not have prevented anybody from joining the meeting.

This blog post is for calendar week 16 of my weekly blogging series for 2016.